Helllllo! I’m so excited to tell you about this past weekend!!

And that is because I met internet friends…IRL!!!

For a hardcore introvert like me? This isn’t something I do every day. Especially if the meetup is in a completely different state.

But I’m thrilled I stepped out of my comfort zone and spent the weekend with two of my favorite blogging buds, Liz from Pumpkin and Peanut Butter and Lucia from The Foodwright.

I had met Liz in person once (here in Pittsburgh!), but Lucia was one of those internet friends I’d text all the time when I was having a recipe naming crisis or photo editing debacle.

But less than a month ago, we decided to take our internet friendship to a new and unseen level: in-person.

We decided on Boston: one of my bucket list cities and the city where Lucia lives. It’s a quick hour-ish flight from Pittsburgh, and flights are super cheap this time of year. We lucked out and had a beautiful weekend – we even managed to take our jackets off for the majority of Saturday!

As for what we did in the city – we are food bloggers and we like to eat. So we used this short weekend trip as a chance to walk to each food stop on our “must-go-to” list.

I loved this approach to Boston because we saw a ton of the city…seriously, we walked nearly 20 miles in just two days. We walked through Boston Commons, explored a ton of neighborhoods, and talked as if we had known each other for years.

I love these ladies so much (including that cutie in the stroller who was my peak-a-boo bud), and I’m so thankful that we had an opportunity to meet up. I just had the best time, you guys.

Okay, let’s get to the food!

Even though I had some serious trouble pronouncing the name of this place (it’s tah-tay, not tate), this was my favorite stop of the whole entire trip. Won it by a landslide. If they ever start renting out that closet in the back as an apartment, I’m putting in a bid. 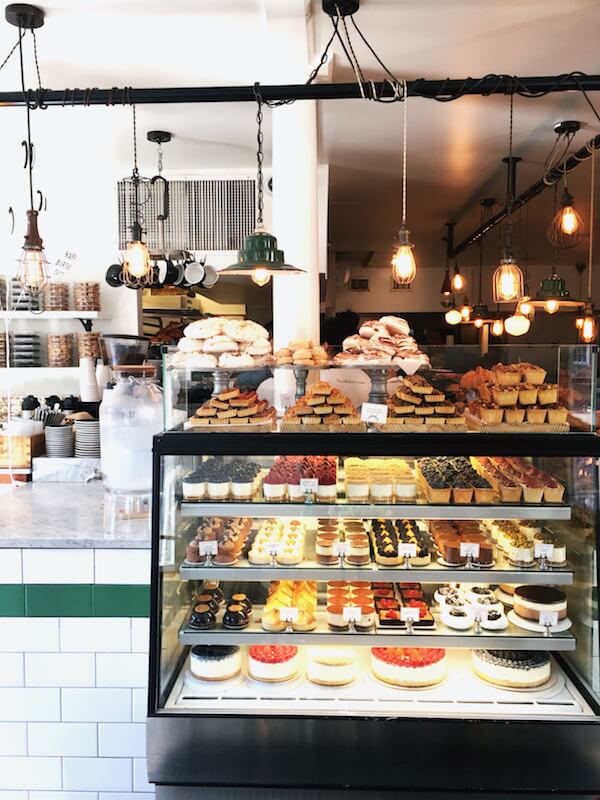 First of all: the decor inside is just…adorable. Perfectly Instagrammable, if you know what I mean. We sat near a window and the doors to see all of our fellow Bostonians meet their friends and family for a delicious breakfast.

Second of all: the food! The pastry case is just…insane. I’m fairly positive most of it wasn’t vegan, but if you’re vegetarian or willing to eat a bit of animal products, the almond croissant was everything I ever hoped for in a baked good!

I also ended up getting the avocado toast (so basic, I know) on sourdough. It came with a fresh lemon-dressed arugula salad and fresh dill on top, which was divine. I actually loved arugula like this, which is surprising considering I typically turn my nose up at it. It also comes with two eggs on top, but I got mine without, no problem (making it vegan!).

Third: coffee! So. The morning I flew to Boston, I got up at 2:30am. It was a long day. I was very tired (but totally energized at the same time because new city, internet friends, and amazing food), so coffee was a necessity for me. They have Stumptown Coffee at Tatte, which made me forget I was running on sleep deprivation! Stumptown was one of my favorite stops when we were in Portland last year, and it was just as good as I remember. Americano with almond milk FTW! 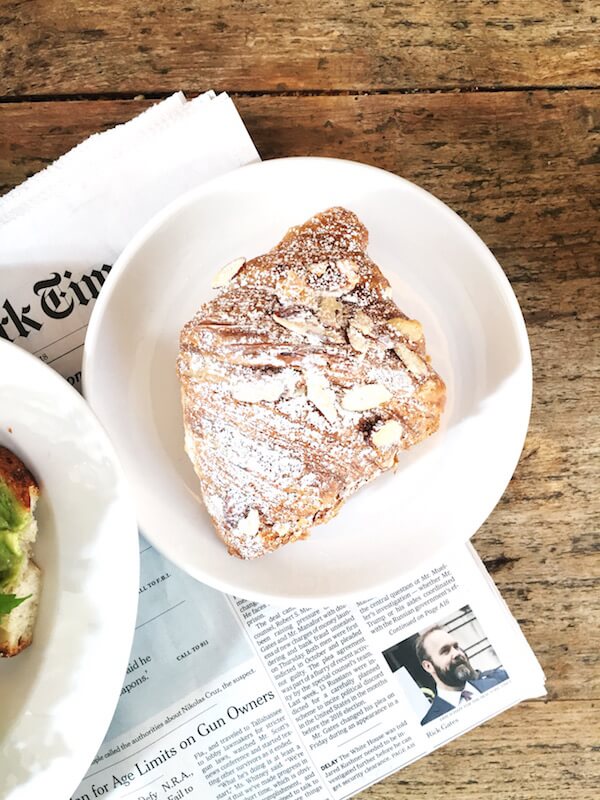 Oh, and there were approximately 5,000 dogs while we were there, and that made me so happy. Can you ever look at a dog and not feel all warm and fuzzy inside?

Shoutout to the happiest lab ever, Bobo. You made my day.

For a little bit of everything: Boston Public Market 100 hanover street, boston, ma 02108

After Liz and I met up at the airport and dropped our luggage off at our hotel, we headed over to the Boston Public Market to meet up with Lucia! Luckily, it was a short, easy walk from our hotel (thanks to Liz who was my fearless map reader).

The BPM is perfect if you’re hungry or if you want experience Boston’s food…but you don’t really know what you want to eat. They have a little bit of everything: tea, smoothies, juices, bagels, kombucha, pastries, coffee, doughnuts, chocolate, veggies…you name it! I had a blast walking around and taking everything in.

We ended up getting some juice at Mother Juice (I got “The 6;” it was good and really earthy – I’d like to try their acai bowl sometime!) and Liz & I split a bagel with house-made hummus at Levend Bagelry (SO good. I’d go back here in an instant! Go early because they were running low on a lot of their bagel flavors. Luckily their plain sourdough is amazing! And the hummus? Super garlicky and perfect in every way). It was a fab start to our Boston adventure! 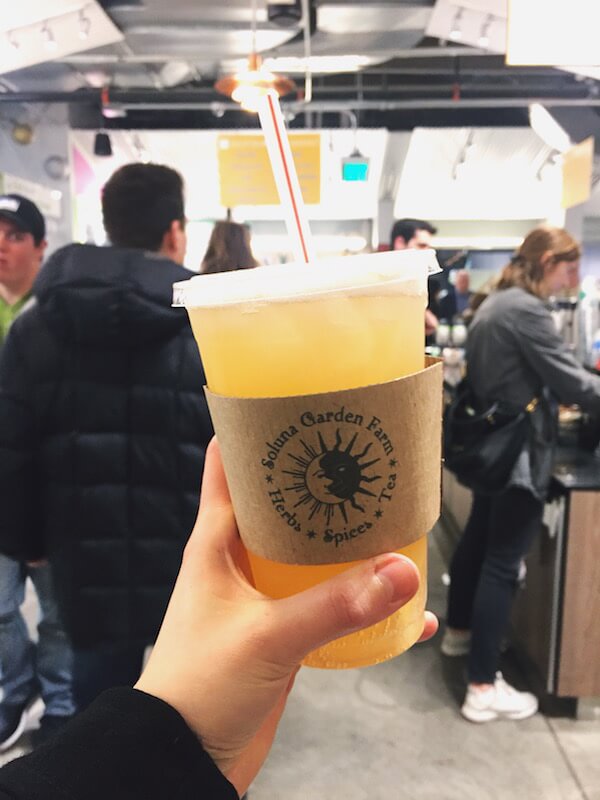 Liz and I actually went back on our last day to get something to drink. I decided on some turmeric kombucha from Soluna Garden Farm which was perfectly refreshing in every way! Highly recommend!

If you’re vegan, vegan-curious, or if you have a soft spot for plant-based yum, you need to try by CHLOE. 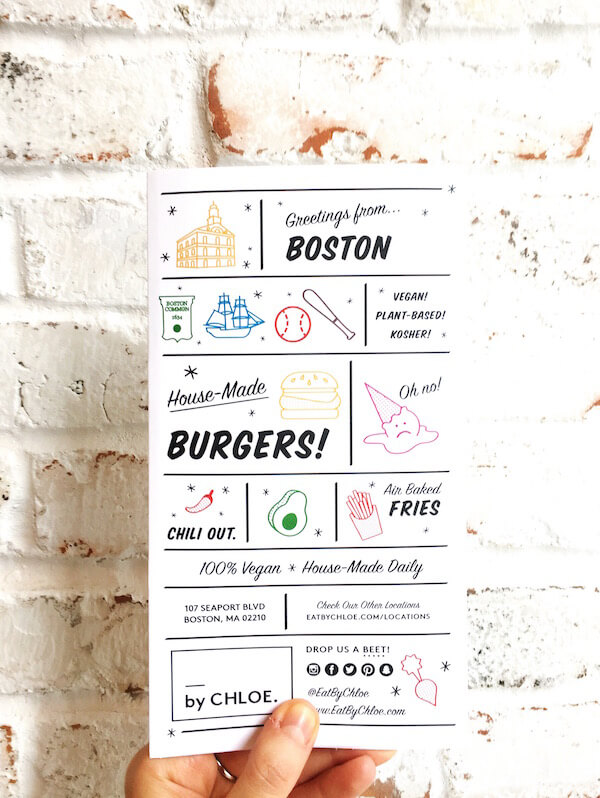 The decor is exactly how you imagined: quirky wallpaper, white brick walls, hanging chairs in the window. And the food didn’t disappoint either. 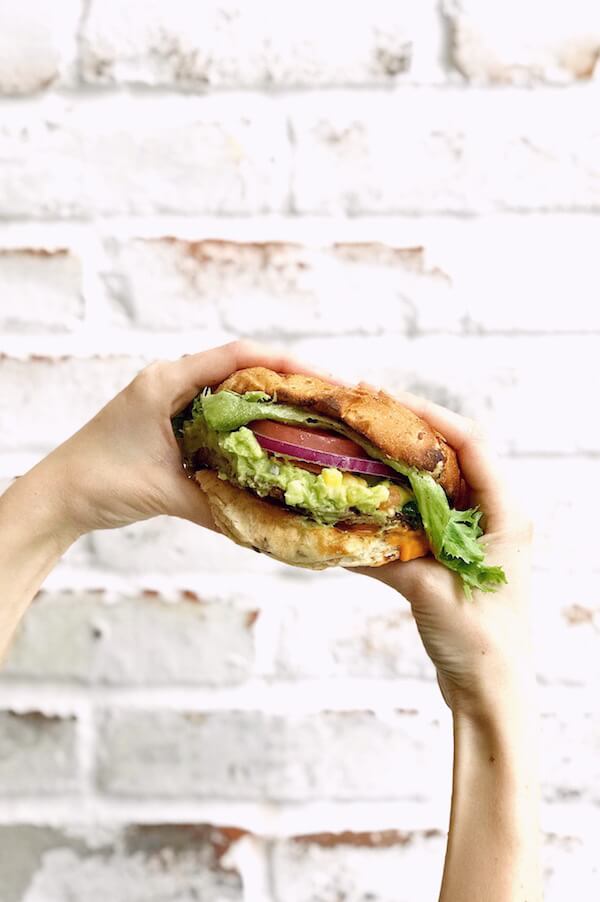 None of us were super impressed with the fries (they were cold and kinda chewy), but the cupcake was bomb. The burger was really good too, but the patty on its own left a lot to be desired (it was kinda limp and mushy on its own). The toppings and bun definitely made it worth it though!

That said, I think Liz and I were both in agreement that the star of the day was absolutely the chipotle aioli. It was really spicy, super creamy, and perfect for dipping your burger, fries, and literally anything else you can find into. SO good. 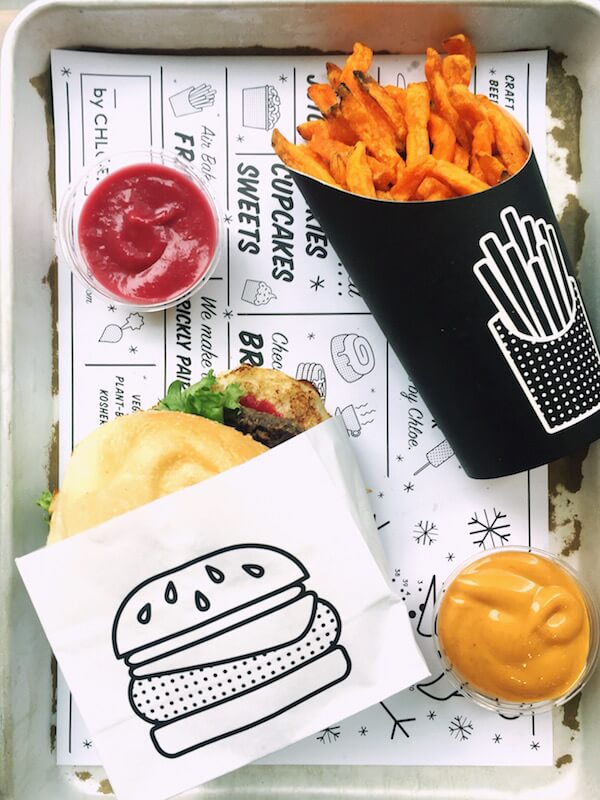 I loved this place. Probably top 5 favorite ice cream experiences of my life! It’s adorable and totally photogenic inside, in a super cute neighborhood (called Back Bay), and full of drool-worthy desserts.

Naturally, I wanted to try a flavor before I actually committed to it. There were a ton that caught my eye including Earl Grey Shortbread, Matcha White Chip, and George Howell Cold Brew, but I decided to try Chocolate Peppermint Cookie. 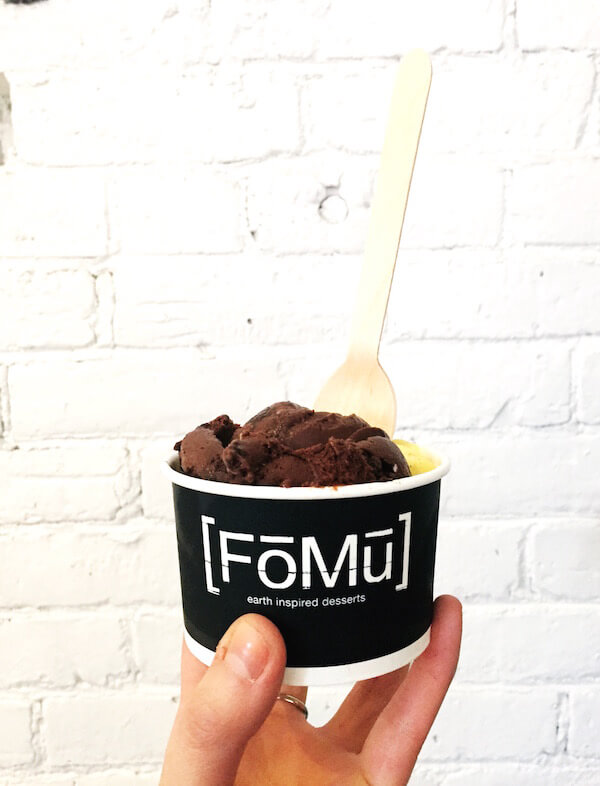 Given the chance, I would have stayed there for the rest of the trip eating the Chocolate Peppermint Cookie ice cream. Read this description (keeping in mind that it’s 100% vegan):

I know it sounds totally over-the-top sweet, but it wasn’t. It was perfect. Delightfully bittersweet and full of texture and bright peppermint flavor. Gah. IMO, there is no better flavor combination than mint and chocolate.

I also tried the Golden Milk flavor that was great as well! But it paled in comparison to the magic that was Chocolate Peppermint Cookie.

If you’re ever in Boston, I’ll pay you handsomely if you want to ship some to PA.

A super cute boutique hotel! I’d highly recommend it because of its location to both a train stop and the Boston Public Market!

We honestly didn’t see much of the hotel because I was out as soon as my head hit the pillow, but Liz and I both thought it was a great choice! They had really good coffee at the restaurant attached to the front desk area, and a Keurig in the room if that’s more your speed.

Oh, a weird thing to mention: I loved that they had big bottles of shampoo / conditioner / body wash in the shower. I hate those tiny bottles. And the hand cream they had smelled AMAZING!

Grainmaker – 91 summer street, boston, ma 02110 – Think Chipotle, but for Asian-style food. It was good, not great. I think it absolutely had the potential to be great had I ordered off the pre-made menu. I just kind of picked and chose ingredients that I thought sounded fun, rather than flavors that would have worked better together. That said, I loved that they had cauliflower rice, the crispy tofu was great, and the red coconut curry sauce was PERFECTLY spicy and delicious. I’d suggest skipping the Thai Guac, which didn’t have much of a “Thai” flavor.

Pressed Juicery – 288 newbury street, boston, ma 02215 – Located in an ADORABLE part of town (seriously would consider moving there if I happened upon some $$$). Lucia bought us a Chocolate Freeze topped with chocolate chips, coconut, and almond butter, and it was really good! I love the ingredients in the Chocolate Freeze: water, dates, almond, cacao, and sea salt. If you’re a fan of Italian ice and want something a bit on the healthier side, this is a really great stop for you!

Flour Bakery – 12 farnsworth street, boston, ma 02110 – I was so excited to check this place out! I had heard about it on Food Network before (the woman who started it didn’t have any sweets growing up and graduated from Harvard with a degree Applied Mathematics and Economics…#girlboss), and it didn’t disappoint! Unfortunately, I was too full from our breakfast at Tatte and lunch at by CHLOE. to actually buy anything, but the sights alone are worth the stop! They’re famous for their sticky buns (which I’m assuming are not vegan), but they did have some vegan options including a Vegan Oreo!

Love Real Food Cookbook by Cookie + Kate – Not a Boston stop, but I had to mention it because we cooked from it during our night-in! Instead of going out for dinner, we decided to do what food bloggers do best and cook and have a quiet night in. It was such a great idea, and the food was great! We made the Hibiscus Pink Lemonade (page 138) and the Sweet Potato, Poblano, and Black Bean Enchiladas (page 148). Neither are vegan, but if you swap out agave or maple syrup for the honey in the lemonade and hummus for the sour cream in the enchiladas, you’ll be good to go!

Have you ever been to Boston? What are some of your favorite eats in the city? More importantly: where should I go next?!