Welcome to recipe #1 of Oat Week – 4th of July Edition! This post is sponsored by my wonderful friends over at Bob’s Red Mill – we’re using their Gluten Free Oat Flour for these Gluten Free Vegan S’mores!

It’s Oat Week again!! Am I dreaming?! This is shaping up to be one heck of a summer, friends! 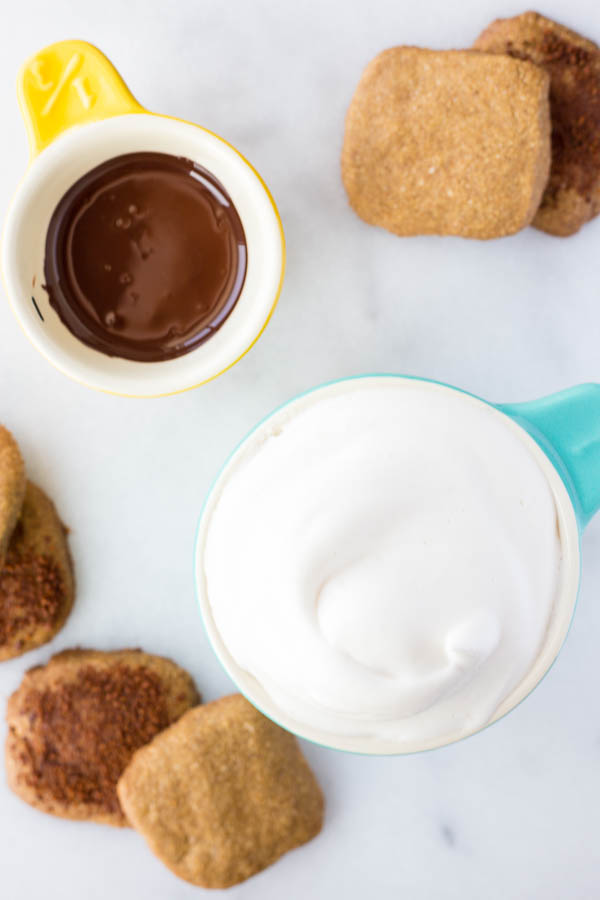 Especially because we now have s’mores!! I’m so freakin’ excited about this one!

Truth be told, I’m a huge s’mores fan. That melty marshmallow, that rich chocolate, and those cinnamony graham crackers. I can’t even tell you how much I loved s’mores as a kid. I’m not that much of a camping, outdoorsy type (I could never get behind the idea of eating and sleeping with the bugs), so I barely even had s’mores growing up. But I just remember being obsessed with s’mores whenever I got the chance to have one!

I was recently telling Mark about my love affair with this dessert, but he had the strangest look on his face while I was talking. When I was done, he asked me to say “S’mores” one more time. I did, and he started laughing.

TURNS OUT I’ve been saying “S’mores” as “Some-mores” for my entire life. I made a one-syllable word into two.

Oy. Oh well. Regardless of how you say “S’mores,” I can nearly guarantee you’re gonna LOVE my rift on them. 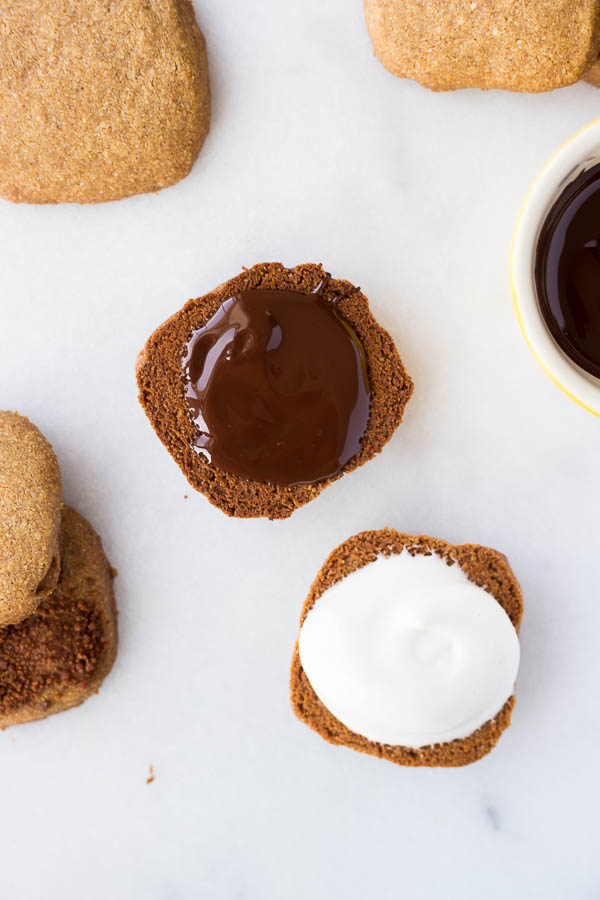 It all starts with my play on a graham cracker. I used just a simple combination of Bob’s Red Mill Gluten Free Oat Flour, almond flour, coconut oil, cinnamon, maple syrup, and molasses. Mark, a self-proclaimed graham cracker efficinato, loved them. The dough is a little wet, but after they’re baked, they crisp up nicely around the edges thanks to the oat flour! They still have a bit of chew in the middle, which I love and prefer with the soft interior ingredients, but if you’re a crunch graham fan, simply bake them for a minute or two longer.

I decided to sprinkle some cinnamon-coconut sugar on the tops of one batch, and while they tasted delicious, they looked a little…weird. Not unappetizing in the least, just not very pretty. So if taste > looks, I highly suggest you going the “sprinkle” route.

Next up! MARSHMALLOW FLUFF. Making this the perfect you-don’t-need-a-campfire-to-make-these s’mores! This marshmallow fluff is made vegan and refined sugar free thanks to a very special (and, admittedly, bizarre) ingredient: aquafava. I used aquafava (otherwise known as the water in a can of chickpeas) about a year ago with this recipe, and I was completely and totally blown away at how much it tastes like actual marshmallow fluff when mixed with a liquid sweetener and vanilla extract. It’s so crazy, I know. But guys, I’m telling you. This aquafava marshmallow fluff is the real deal!!

Now for some chocolate. I have had a full-on addiction to the Organic Dark Chocolate from Trader Joe’s recently (it’s the same stuff I used in these!!), so I wanted to use it here. Because our marshmallow fluff isn’t hot like a marshmallow right off the campfire, our chocolate needs to be melty, ooey, and gooey before adding it to our s’more creation. Pro tip: if you wanted these s’mores to be truly refined sugar-free, you can totally sub the dark chocolate for this chocolate fudge sauce! 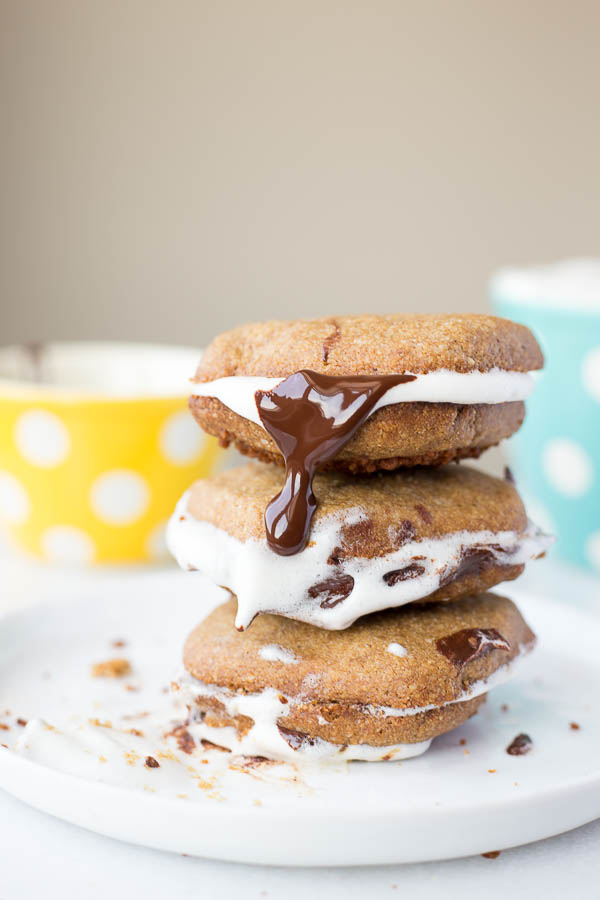 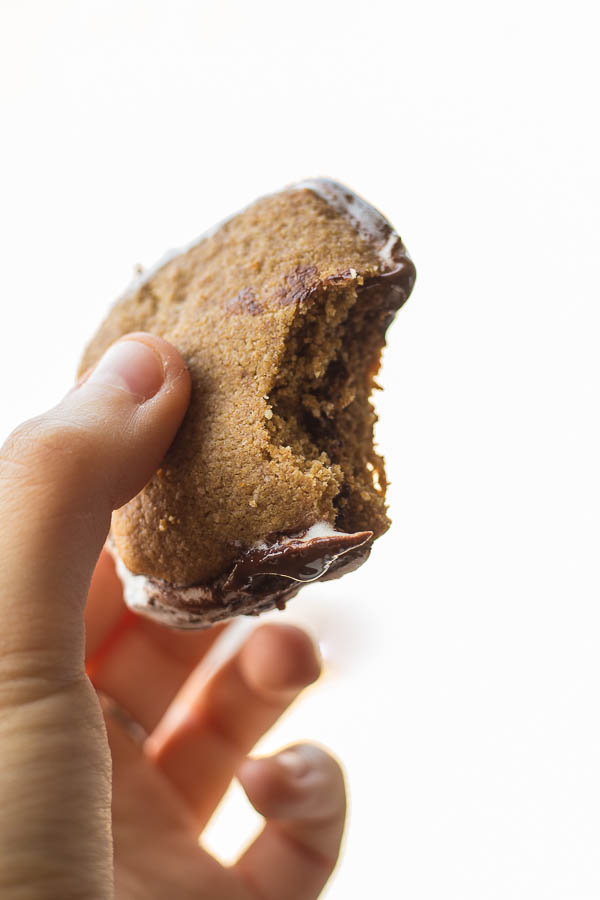 And take it to someone who knows, you’ll need to stuff these a lot less than you think. I piled on a little too much marshmallow fluff on my first s’more and it was a complete and total mess.

But if it wasn’t the most delicious mess I’ve ever had to deal with, I don’t know what was.

S’mores in the comfort of your own living room. Now that’s an idea I can get behind.

*The graham crackers still have a bit of chew in the middle, which I love and prefer with the soft interior ingredients, but if you’re a crunch graham fan, simply bake them for a minute or two longer. Just be sure to keep an eye on them to be sure the bottoms don’t burn!
**You’ll definitely have some marshmallow fluff leftover, so you can put it in an air-tight container in the fridge. The ingredients will separate in the fridge, but you can simply re-whip it in your stand mixer/with your hand mixer, and it’ll be as good as new!

A very special thank you goes to Bob’s Red Mill for sponsoring this post and for supplying me with some of their delicious gluten free products that I love for this recipe! All opinions are my own. 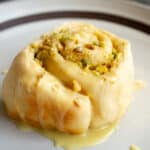 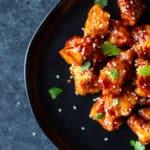