Monday’s a swell day for pie, isn’t it? 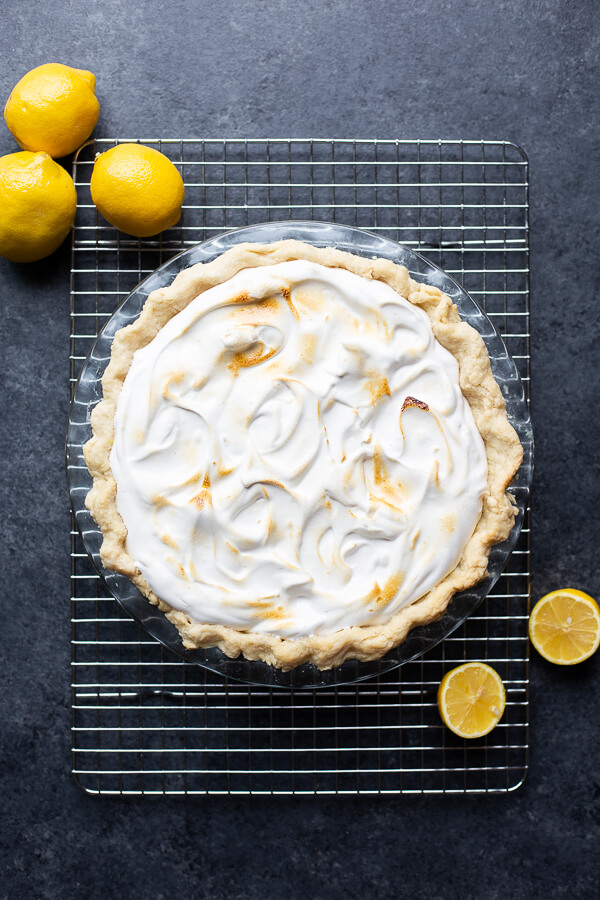 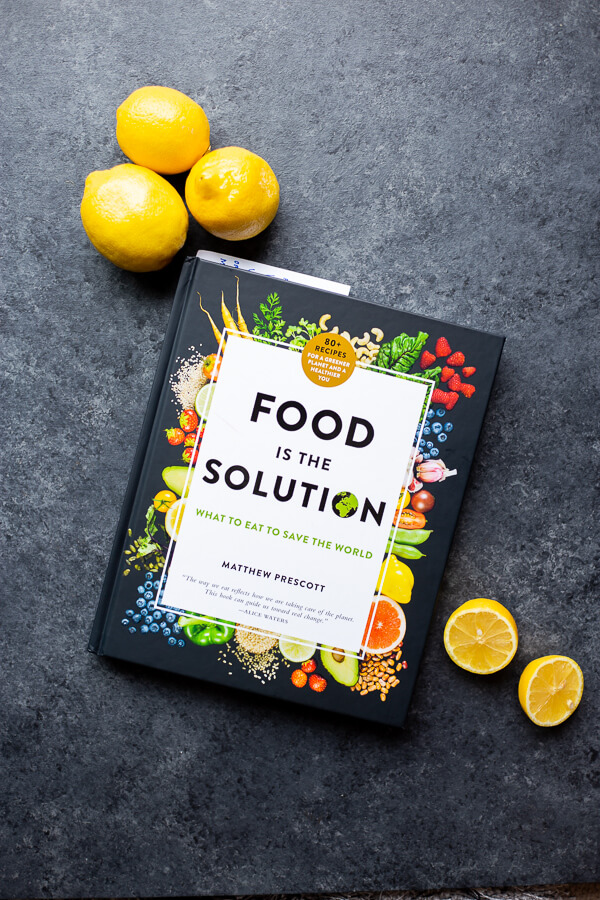 TBH. Pie and I are not the best of friends.

While I’m not one to turn down any sort of cake, brownie, or cookie (preferably in chocolate form), pie is a sweet that I can almost always do without.

Mark, on the other hand? The complete opposite. I’ll make a batch of cookies, and he’ll let them sit there without as much as taking a WHIF of the things.

That’s why I decided to make him pie. And it’s perfect timing because we’re celebrating our three year dating anniversary this week!

We’ve had an awesome three years together. We adopted a mischievous floof. Traveled across the country. Ate lots of delicious food. Went on our first official date after we started dating. Moved in together. Graduated college. And so much more.

It’s super lemony, just the right amount of sweet, and a fun culinary challenge to tackle for a special event like an anniversary!

Ready to get lemony? Let’s do it! 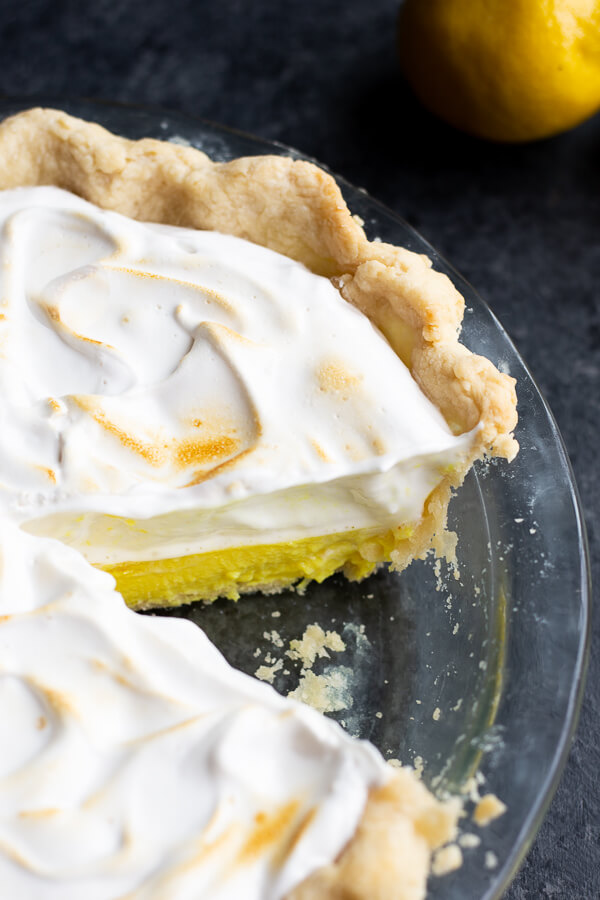 Let’s break this pie situation down into three manageable parts:

1. The Crust. It’s a very traditional pie crust recipe made with flour, vegan butter, ice water, salt, and a wee bit of sugar. The most insane thing happened with this crust: I actually liked it. Dare I say: it’s a crust for crust-haters!

I’m not sure if it’s because it’s flakier than most other pie crusts I’ve ever had, but man was it good. Crust is usually my least-favorite part of any pie, and I found myself eating the crust first! So good and simple. I actually baked mine the night before so the filling / topping would go quicker the next day.

2. The Filling. This is where things get…weird. In a good way! The filling and the topping both looked like they’d challenge me a bit, and I was so happy to tackle it and conquer it! You’ll need lots of lemon juice, some lemon zest, some sugar, ground turmeric (for color), coconut cream, silken tofu, arrowroot powder, and agar agar powder.

BEFORE YOU GO RUNNING AWAY: it’s okay. This pie doesn’t taste bean curd-y with the tofu in it. The tofu just makes it super creamy and gives it some structure. The agar agar powder is a vegan gelatin substitute, and it’s actually extracted from seaweed! I knew this ingredient might be a bit hard to find in a normal grocery store, so I ordered this version (affiliate link) off of Amazon, and it worked perfectly! God bless Amazon, man.

The filling ends up super rich and slightly jiggly…almost like a pudding with a little more structure. It cuts perfectly into pieces like a dream!

3. The Topping. Traditional lemon meringue pie topping is, like the name suggests, a meringue. Which is made primarily from egg whites. As a vegan substitute, we’re using…AQUAFABA!

Surely you’ve heard of this crazy vegan egg white substitute, right? It’s the water from a can of chickpeas. Yes, you heard me: chickpeas. You whip the aquafaba in a stand mixer with cream of tartar and vanilla, then slowly add some sugar, and whip until you get stiff peaks. There ya go: vegan meringue. SO simple, and way delicious.

I baked the meringue on the pie for 5 minutes, then I torched it because I’ll never ever pass up an excuse to play with fire. Especially in the kitchen. It’s amazing.

I also reserved a little bit for vegan fluffernutter sandwiches, and I may have died and gone to culinary heaven for a good five minutes. Such a fab decision. 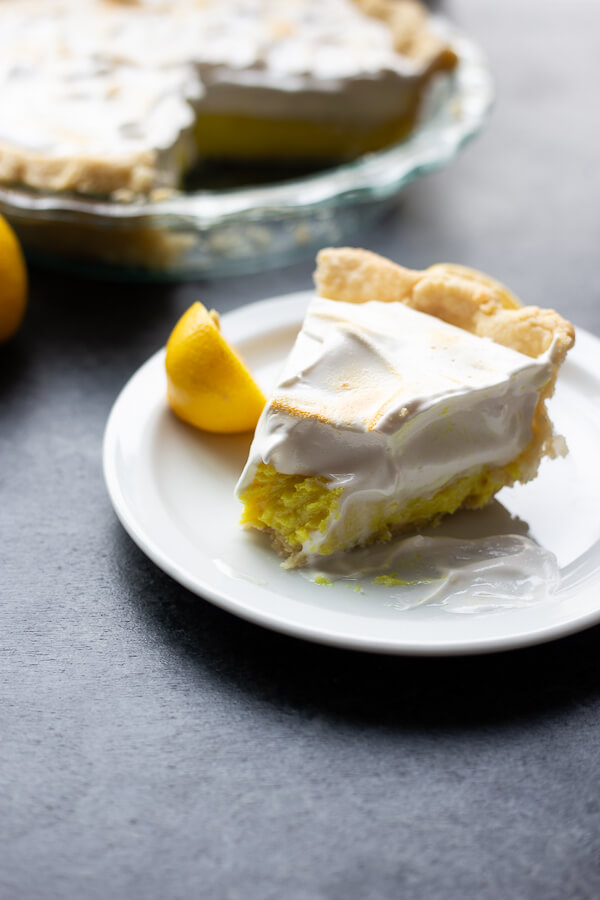 If you love delicious vegan food (like Pittsburgh Pierogies, Beet Burgers, Bahn Mi Sandwiches, and Reubens), as well as learning more about the environmental impacts of food decisions, I know you’ll love Food is the Solution (affiliate link). I adore books that actually teach me something, and I’ve already learned so much about the agricultural world from this book.

Mark and I have already ear-marked quite a few of the recipes in the book, and if they turn out anything like this pie, they’ll be bangin’.

ps. I’m giving away THREE copies of this book over on Instagram today, so be sure to hop over there to enter! I’ll post the deets around 8am ET! 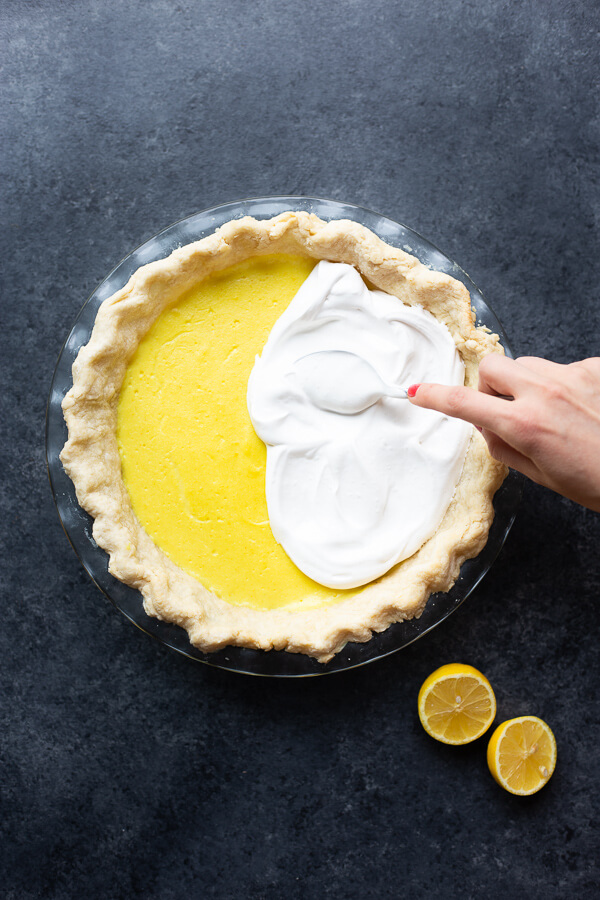 This vegan lemon meringue pie is tart, sweet, and super fun to make! The crust is perfectly flakey, the filling is flavorful and springy, and the meringue is made from a special vegan ingredient!

*My lemons were tiny and I LOVE lemon zest, so I zested two!
**Stick a can of full-fat coconut milk in the fridge overnight. It'll separate into solids (coconut cream) and liquids (coconut water). You just need the coconut cream for this recipe.
***I wanted my pie a bit yellower, so I added just a pinch more turmeric. The color deepens after you cook the filling.
****1 standard 15-oz. can should give you enough aquafaba for this recipe, but you can buy two cans just to be safe. What to do with the leftover chickpeas? Try this, this, or this.
Recipe from Food is the Solution (affiliate link). Reprinted with permission.

A special thanks goes to Flatiron Books for sending me a copy of this cookbook! So excited to cook and learn my way through it.